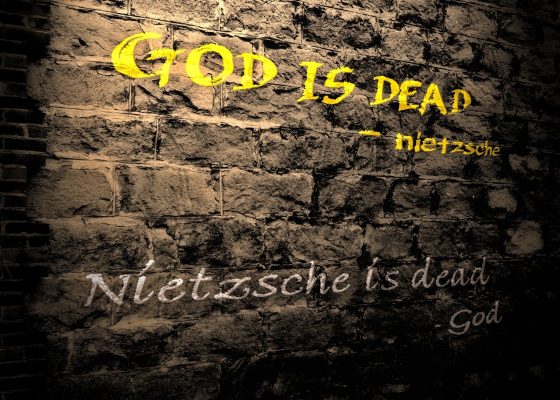 Scholars regard Friedrich Nietzsche as the undisputed father of positive thinking.

Here are a few of this nineteenth-century German Tony Robbins’ greatest quotes and aphorisms that have inspired me since I was a lad.

Hearing his words is like the warmth of the sun’s rays holding you in a loving embrace. Or the unadulterated joy of watching kittens tumble and squeak across a verdant field.  Or the peaceful Zen of the ocean surf’s eternal pounding against a sandy shore.

That said, a lot has been written about Nietzsche’s influence on fascism and the thinking of saucy tarts like Mussolini and Hitler.  What a load of crap. Nietzsche was an invalid from tertiary syphilis thirty years before the wave of anti-egalitarianism swept through parts of Europe.

His dear sweet sister, Elisabeth, was the real peach. A known right-wing darling and anti-Semite, this aspiring Nazi served as her brother’s editor and curator until he died under her care in 1900. His last years were lived in a nearly catatonic state of paresis and mental collapse.

While Nietzsche continued to languish, Elisabeth began reworking, and later publishing, some of his unfinished writings to align with her extreme support of fascism. She helped further the misconception of Übermensch, the Nazi concept of the superman, leading ultimately to Hitler’s concept of a master race.  Hell, she was so well-regarded in national socialist circles, her BFF and Teppichfresser, Hitler, even attended her funeral in 1935.

Teppichfresser, for those of you who lack sufficient German language skills, literally translates as “carpet eaters.” Apparently, as revealed in William Shirers’s book The Rise and Fall of the Third Reich, Adolf Hitler was so neurotic about the Czechs, he was frequently seen with nervous tics, often dropping to the floor in a rabid rage, literally chewing the edge of the carpet. If there was licking involved, Hitler may have been close friends with Eric Cartman’s mom. (Sorry, could not resist the South Park reference.)

So, for Nietzsche, there is some bitter irony in the concept of “what does not kill us makes us stronger.” Stronger? His body was stolen by syphilis, and his words were stolen by Elisabeth. And yet he lingered in a twilight existence, imprisoned in his own body, only to live on in posthumous infamy thanks to his Nazi Arschloch sister. No more free German lessons…look it up.

From my perspective, “what doesn’t kill you makes you stronger” is rather bogus, too. The implication is that conquering adversity, at some moment in time, makes you more prepared to deal with future challenges. On one level, this can be true. But it does not speak to the new baggage, side effects, or residual impact that, having survived a catastrophic event, carries forward following the trauma.

Glass half empty? Maybe. But suffering makes you angrier. More cynical. Less trusting. More anxious. And, in my case, gave me ulcerative colitis. So, I would re-work Nietzsche’s concept to more accurately reflect the nuances of trauma and its residual impacts to state, “What doesn’t kill you gives you colitis.”

You may ask yourself, “What is ulcerative colitis?” Well, David Byrne, thanks for asking.

Ulcerative colitis (UC) is an autoimmune disease. You develop long-term inflammation and sores (ulcers) in your colon.  While some of the time, you are in remission and asymptomatic, other times, you experience flare ups. A flare can be debilitating. Skip the next paragraph if you are easily grossed out.

We all normally poop each day. A UC flare can make you feel an intensely urgent need to poop twenty times per day. And each trip to the commode brings explosive diarrhea filled with little treats like mucus, blood, pus, and clots from your ulcerated intestines. And throughout, you are gassy and bloated with stabbing abdominal pain. And this can last for days, even weeks. You truly feel like ass (pun intended).

The only medical cure is to have your bowels removed completely and an ileostomy performed.  A surgeon creates a hole in your abdomen upon which you hang a poop bag to externally collect your liquid waste.  The practical upside is the fresh feces can keep you toasty like a hot water bottle on a cold winter night. My grandpa had his “poop bag,” and oh, the cuddles we used to have!

Most times, through pharmaceutical experimentation – and not the good kind – you discover a regimen of meds that ultimately induces remission from a flare. Until the next flare. Gastroenterologists tell you it is equal parts science and magic, sprinkled with a little bit of luck.  Throw in an annual colonoscopy, and you, my little Ricky Martin, are living la vida loca.  Or, for Nietzsche, ein verrücktes Leben.

Mark your calendars. There will be a future post on colonoscopies… for sure.

Part of managing UC is understanding your triggers.  They are different for everyone. Stress for me seems to be the main culprit. Since I have always been a bit of a jacked-up spaz boy, often skating along a frenetic cliff’s edge, you can imagine how heavy loads of stress can send me stumbling to the toilet.

Fun non-sequitur: in 2016, I had shoulder surgery to repair a torn rotator cuff and labrum.  This was my first surgical procedure in my life, and I was knotted up with anxiety in the days preceding the first cut. Like clockwork, the day before the procedure, I erupted in a full-on, nasty-ass UC flare-up.

Sitting in pre-op, IVs hanging out of me like seaweed, floating in a sea of anxiety, I kept telling the nurses I needed to use the bathroom before going into surgery. They laughed it off. I was freaking out.  The anesthesiologist came in to assuage me that in his twenty years, he had never seen anyone poop on the operating table, and he would make sure that did not happen to me. I was not assuaged.

Fast forward a few hours later, as I am sleepily and blissfully emerging from my anesthesia slumber, I hear an alarm going off and nurses yelling, “Oh my God! He’s shitting! He’s shitting!”

Laying on my non-surgical side, I then feel people packing towels against my back and butt.  Yelling and bustling, the team worked to stem the brown tide. Still groggy, realization of my shame rose in crimson waves to my cheeks.  I made eye contact with the anesthesiologist, and he simply mouthed, “I am so sorry.” When he visited me in post-op, he, my wife and I had a grand laugh about it all.

What was my trigger event for ulcerative colitis? Well, Lieutenant Columbo, let me tell you.

My first UC flare-up happened randomly at the end of 2007, on a flight back to the United States from a visit with our manufacturing partner, Charlie Chan in China (see additional reference in Useless Pets blog post).

Given the symptoms, imagine the fun I had on a fourteen-hour flight from Beijing to Chicago.  And airplane bathrooms? Barf. I can go on about that for days. So gross, made incrementally grosser by me.

My brother, best friend, and some high net worth angel investors owned our company at the time. While we skyrocketed in 2007 and 2008 – won Consumer Electronics Show Innovations Award, profiled on CNBC’s Squawk Box – when the stock market crashed in November 2008, we slowly unraveled for the next eighteen months and never recovered. We filed for bankruptcy in May 2010.

The stress was inexorable. And I was in a constant state of UC flares through this time, which further limited my ability to lead our business out of the abyss.  To paraphrase Nietzsche, the abyss was gazing back at me. And I did not like what I saw.

The death of our business did not kill me. After a couchbound ‘summer of sadness’ in 2010, I shaved my ZZ Top beard, trimmed my pterodactyl toenails, and got off the couch, forty pounds heavier. Yes, I ate away my feelings that summer. Eventually I broke eye contact with the abyss and looked to the light, and there was a shiny bag of Doritos waiting for me.

But was I stronger? You sure have a lot of questions today, don’t you?

Maybe. Certainly, more laser focused. When I finally went back to work, I had a nacho chip on my shoulder. Something to prove. Having never experienced failure on such a grand scale in my life, I assailed my new job that year like Ragnar Lothbrook on a Norman castle.  That hard work has been rewarded with a solid career ever since.

But I was so singularly focused on success at work that I lost sight of addressing the weight gain from the ‘summer of sadness.’  Living in airports and traveling every week reinforces lazy, bad eating habits, and the residual impact of maintaining that weight led to Type 2 diabetes.

The residual damage from the bankruptcy continues today with the UC and diabetes. The colitis is reasonably well managed. With my career doing great, I am now turning that laser-focus on to fitness and weight loss, seeking to reverse the diabetes before it has too much time to gain hold of me. Stay tuned.

My closing thought is simple: unless you believe in reincarnation, you only have one life. Grab it by the haunches and hump it real hard, before it humps you.  When it does inevitably hump you, take it. Endure.  Unlike Nietzsche, if it does not give you syphilis, hopefully you will come out stronger.

And at least würdest du gefickt along the way.

4 comments on “What Doesn’t Kill You Gives You Colitis”