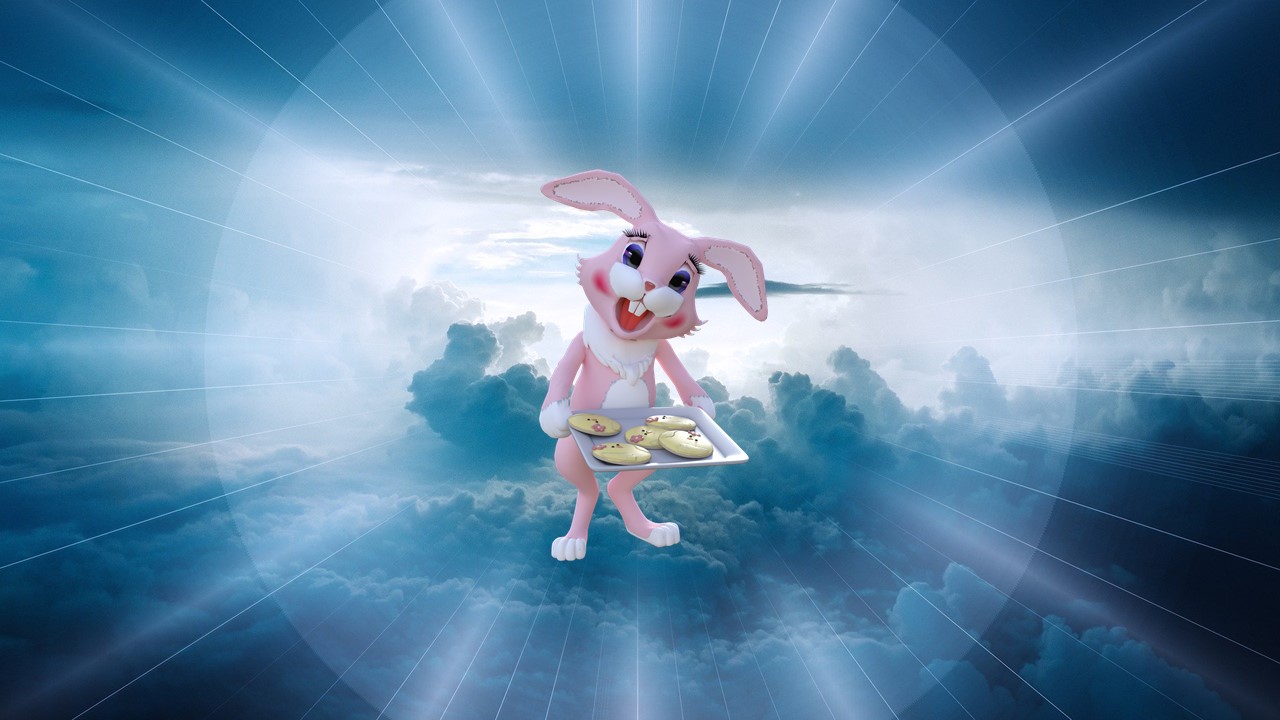 Growing up Catholic, Easter was always the most confusing holiday for me.

On one hand, Easter was a celebration of the death and resurrection of Jesus Christ. He was born, God made man, to a virgin. He preached and performed miracles. Brutalized and crucified, he died for our sins. Three days later, he rose from the dead and ascended into heaven. God sacrificing His only begotten son opened the doors of heaven to us, if we would believe and have faith.  WOW.

On the other hand, the Easter Bunny secretly invaded our home in the middle of the night. A freaking rabbit. EB hid treats all over the house, which we children had to sleepily search for on Easter morn. The grand prize was a large individualized Easter basket, also hidden, with our names written on it. Then we would gorge ourselves on chocolates and Easter eggs until we were puking in our mouths at Easter mass. WTF?

This never computed in my child brain.   How could something so sacrosanct and something so commercial coexist on the same holiday?

To make it more confusing, historians remain conflicted as to the origin of the term “Easter”. Why not call it “Resurrection Day” or “Jesus Day”?

Most researchers support the findings of the seventh century monk, St Bede, that the Anglo-Saxons named the month of April after the pagan goddess, Eostre. Also spelled Eastre, her festival commemorated the arrival of spring.

Over time, as Christianity supplanted ancient religions, the English term “Easter” helped smooth the transition from pagan to Christian.  By retaining remnant names and dates, the Saxons could retain some cultural identity, even as they replaced the many old gods with the one new God.

And what about the Easter Bunny?

Some blame the German tradition of a mythical bunny named Osterhase crapping out colored eggs in a basket as the root infiltrator of Christian traditions.  Not sure that theory scratches my intellectual itch.

But let’s run with it, because EB clearly shares the holiday with Jesus today. One could also argue EB inappropriately steals the limelight from JC today. And that’s not right, he said in his favorite Kevin Meaney imitation.

After rigorous academic debate over many years, historians and theologians have pieced together four hypotheses that support how the Easter Bunny could exist on Christianity’s most holy day.

It all makes so much more sense to me as an adult.  Irrespective of which theory you subscribe to, Jesus irrefutably enabled the Easter Bunny legend to share His biggest day.

Jesus was all about love.  This probably best supports the Gospel of Reg theory. He sure loved that rabbit. Not sure why the early church decided to edit Reg out.  Bad marketing on their part. The story is a delight.

Historical and religious conundrum solved.  We can now return to our Easter holiday of sheltering in place during this Covid plague, watching loved ones eating ham on Zoom, basking in the confidence we have no problem with a bunny sharing the limelight with the Savior.

4 comments on “Finding Jesus in the Easter Bunny”