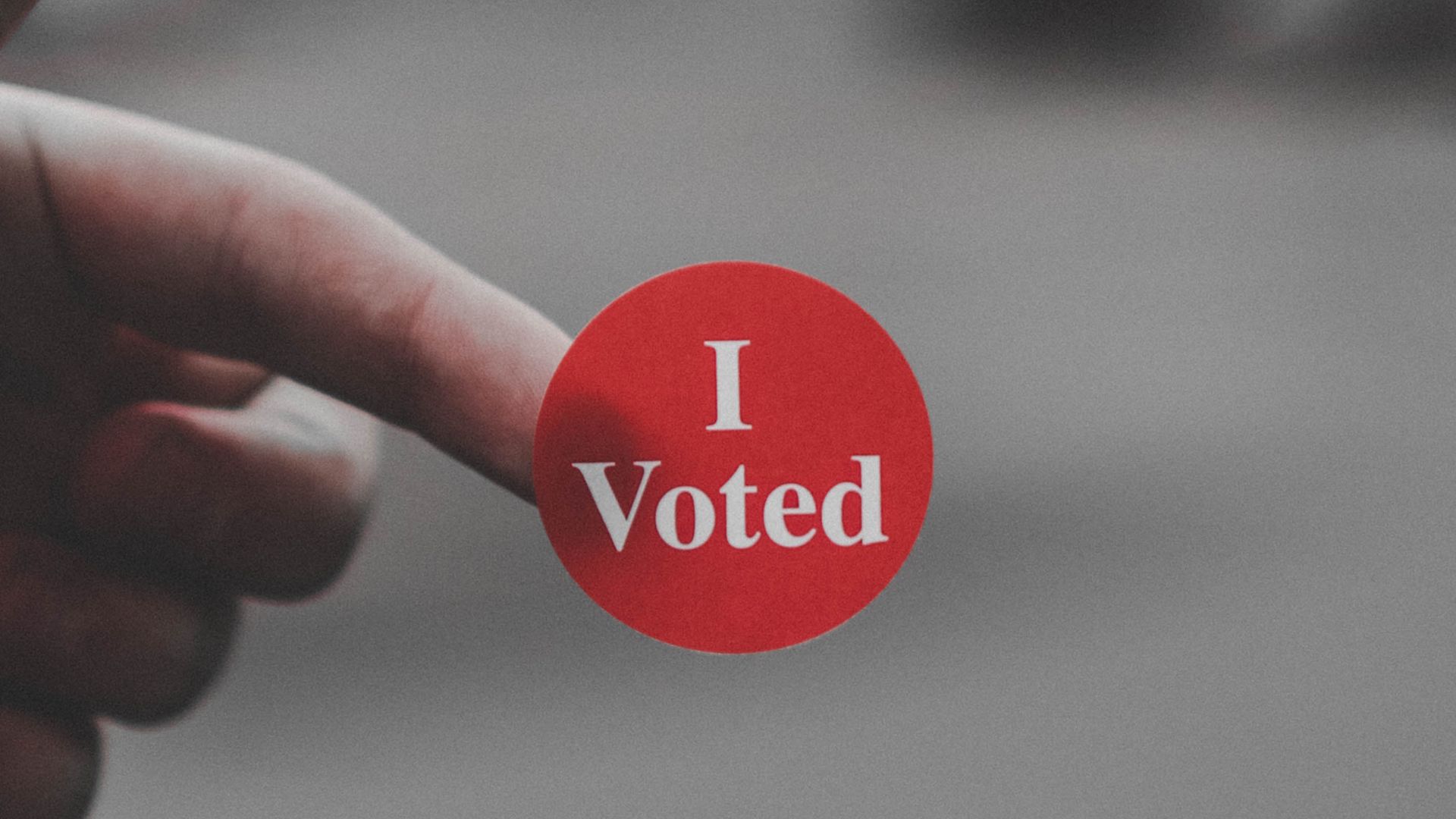 “It’s a beautiful thing. I think our future is bright. We’ve been dealing with some tough times, but I’m starting to say, ‘Man, these times are about to move. We’re moving past these times and voting is one of our biggest steps to get past these times.'” – Common, songwriter and rapper

In his recent interview with CBS News, Lonnie Rashid Lynn, once known as Common Sense, now Common, spoke to younger voters. He encouraged their generation to stop sucking and do their civic duty to vote this year.

Why do certain famous people do that? Change their name?

Think about it. Let’s consider some examples…

But I digress. Lonnie aka Common sent me through the looking glass.

Our right to vote is one of the fundamental liberties our Founding Fathers secured for us lo those many years ago. Yet somehow, too many people squander it. Take it for granted. Feel that their one vote does not matter.

Imagine if everyone thought that way?  Our democracy would crumble, and we are only as strong as the weakest link in this patriotic chain.

Think of the stakes.

Friends, this is a comedy blog. I don’t give two flying flipping figs of a fuck what you think about politics. You’re here to experience the genius and wisdom that is me.  Buckle up and stop taking shit so seriously.

Let’s begin with the hysteria around the stakes and the apocalyptic nature of this election. Let’s speak plainly. Shall we?

I call bullshit. More of the same…

I love Common’s blind optimism. Wish I shared it.

We have lost our ability to look beyond our own tribes.

We huddle in trembling online herds with Similars – people who think, talk, and feel like us. We not only isolate Dissimilars, but we also castigate them. When is the last time you expressed your opinion on a political matter on Facebook or Twitter only to be eviscerated by a stranger who possesses the ignoble faux courage of anonymity?

Oh? You don’t post your opinions anymore? Don’t want to deal with it? Too stressful? Enter the beginning of the end of America’s grand social experiment in democracy.

People have given their lives for generations to prevent Socialism or Fascism from taking root. Now those loud angry voices are all we hear, and most of us do, let alone say, nothing. Sad.

And thus, we land with two completely inferior presidential candidates. The contrasts are clear…

Both. Suck. Big time. And it is 100% our fault for sucking even worse that we cannot find two vastly superior candidates among our incredibly innovative, creative, intelligent adult population.

And so, we all emerge from our Covid hidey-holes. Proud Americans looking to vote early because an impatient, petulant Someone-in-Chief needs to know results on election night. Or else.

I joined the throngs this week at my local police station for early voting. Figured there would be less likelihood of Q’Anon militia with automatic weapons intimidating us with the po-po stationed in such proximity.

For late October in Upstate New York, the weather was lovely. A cold, sunny, windy late autumn afternoon.  But we are used to unpredictable weather up here. We know how to dress in layers accordingly.

It could have been gale force winds or three feet of Lake Effect snow. As far as I’m concerned, we dodged a bullet that day.

Flushed cheeks were the worst clinical result of waiting outdoors in such a large line of voters. Or do I have adult rosacea? Hm. My rosy hue is not going away.

Not one Covidiot anywhere in my proximity. Almost everyone masked and social distancing (sort of, more to come). They didn’t let the outdoors excuse their stupidity. They learned from the now infamous Rose Garden super-spreader lesson.

Please enjoy my ruminations from my ninety-minute wait.

Pensioners in Front of Me

The line of voters wended along the perimeter of the massive police parking lot, extending into the Department of Public Works’ adjacent parking lot.

What a crowd! Guessing 300+ people. It looked like ten miles to the police station from the back of the line.

I saw a fat old guy waddling ahead of me, two stadium chairs slung over his shoulder, toward what I saw as my now very necessary place in front of him in line.

Knowing my own extreme intolerance of infirmity, I could not bear the thought of hours spent watching him (and his meatball wife) break camp then set up camp. Over and over. Kill me now, god!

I think he felt me encroaching rapidly into his blind spot. He sped up. WTF! I almost started jogging, then worried about insinuating myself as a middle-age dickhead racing a crippled geriatric to wait in line.  Not a good look.

I decelerated. Assumed my subsequent space behind them. Turns out, his wife was holding his place in line already. Imagine if I came leaping in with a competitive HA! only to discover they were ahead of me anyway?

The good news? They never opened the stadium chairs.

The bad news? They hyper-social distanced. At least twenty feet before they doddered along.

On one level, I get it. Old, fat, likely chronic disease equals risk.  On the other hand, I’m notoriously impatient. I tailgate the shit out of people in my car. Yell at people in traffic. Assuming the role of sheepdog, I began crowding them from behind to scare them toward their pen.

A few nasty looks were exchanged. My masked face conveyed my feelings through my eyes. Don’t care. Fucking move.

While the lion’s share of my focus was on the elderly ram and ewe ahead of me, I could feel the encroachment of the slightly less elderly couple behind me. Crowding me!!

As a rule of thumb, I would try to stay level-headed about equity of assholedom. But these two were simply inobservant. Utterly distracted by the masked intensity of trying to understand each other through their N95s over the blustery wind. They were not paying attention to their location.

[Imagine if I used N95 in a sentence a year ago. Only drywallers would have understood me.]

My ass looked good in my blue jeans that day.  Super psyched to wear my best pair after wearing the same two pair of disintegrating sweatpants at home every day for the last nine months.

Not sure if that sweet blue crescent of man pie looked enticing to my rear guard, but she definitely contacted my butt. Not fully certain of the extent, but I would say there may have been a thumb penetration into the butt crack.  A solid first knuckle of depth.

For those of you with great asses, like me, you know we have one of two choices in this scenario.

I farted. And I think her mittens absorbed the force like an electric shock. Instead of an apology, she started coughing.  A wet, rheumy, tubercular sounding cough from what I assumed to be her Covid-infested chest.

Perhaps my dramatic leap away from them was a smidge dramatic. But those well-sculpted glutes, a byproduct of some serious squats at my home gym during quarantine, propelled me sideways like a gnu from an ass-rapey alligator.

She thought this was a laugh riot. And could not stop laughing. Or coughing thereafter.

Exercise: The Pause that Refreshes?

As if my gazelle-like reflexes were not enough excitement and fitness for one day, I became fixated on hot Yoga Mom and her overfed kids, ahead of me in line by thirty people.

YM was channeling their boredom with waiting in line into something productive. Quad stretches. Lunges. Standing squats. Quite a workout for their Cheeto-covered lips. [Quite a show for any man with a pulse within one hundred yards.]

Inspired, I started doing a few squats whilst waiting for the fossils ahead of me to die or ambulate.

For context, my wife is an amazing cook.

Last night’s meal had been a fat-free turkey burger casserole. Think of it as a delicious taco casserole, substituting ground turkey for beef, but with all the colonic gas stimulating goodies like black beans, cumin, and peppers. My tooting trigger-food.

And I had eaten leftovers for lunch today.  The pump was primed.

But my digestion combined with the movement and pent-up hate had started some serious abdominal cramping. The digestive tectonic plates had shifted. Rectal pressure relief valve temporarily disabled, the law of partial pressures prevailed.

I completely entertained Wyatt and Wynona for the next thirty minutes of hilarious third-grade crassness from my assness. Charming.

After braving the elements for well over an hour, we neared the police station.  Hysterically, the final twenty feet up the handicap ramp was covered by a purposeless tarp.

Everything was pissing me off at this point. The best thing so far was the bout of colon bowlin’ had subsided. Internal spaces emptied, I was getting a little hangry, too.

The rest of the process went quickly. Enter building. Verify ID. Get ballot. Fill-in ballot. Scan ballot. Grab “I voted” sticker.  All the time touching more surfaces that a quart of Purell could cleanse properly in a week.

The volunteer who stood by the scanners was obsessed with collecting our bacteria-ridden public voting pens. Much more so than qualifying whether your ballot should scan face up or face down.

He was also one of those dick-nose Covidiots who dangled his nose like a penis out of the top of his mask.  Why wear the fucking mask, Lenny? GAWD. Better yet, stay like that. Nature will cull the herd through that filthy handful of virally infested plumes in your hand.

I half jogged to my car where my wife’s medical-grade hand sanitizer awaited me. When Covid first began, and all the stores ran out of hand sanitizer, she wisely ordered from a dentistry supply company online.

Married a girl with a whole lotta street smarts. Come on over. We have enough for twenty plagues.

If you have read any of my more political posts in the past, you know I voted for Joe Biden as president. Not because I agree with him at all. But because he was the nicest shithead. Then, to tie his terrible policies up in knots, I voted all Republicans in every other legislative and judicial role.

That felt good. Maybe it buys us four more years to figure out two new candidates for the most powerful political office in the world who is neither a feeb nor a scumbag. Fingers crossed.

I have never understood why people don’t tell you who they voted for. Why not? Why so secretive? I feel proud of my decisions. Happy to discuss with anyone.

Heck, if you want to know how much I earn per year or access my Protected Health Information or use my social security number, give me a call.

Let’s open a digital dialogue. Scroll down to LEAVE A REPLY. Tell us who you voted for and your annual household income. Thanks!

4 comments on “Exercising My Civic Duty”